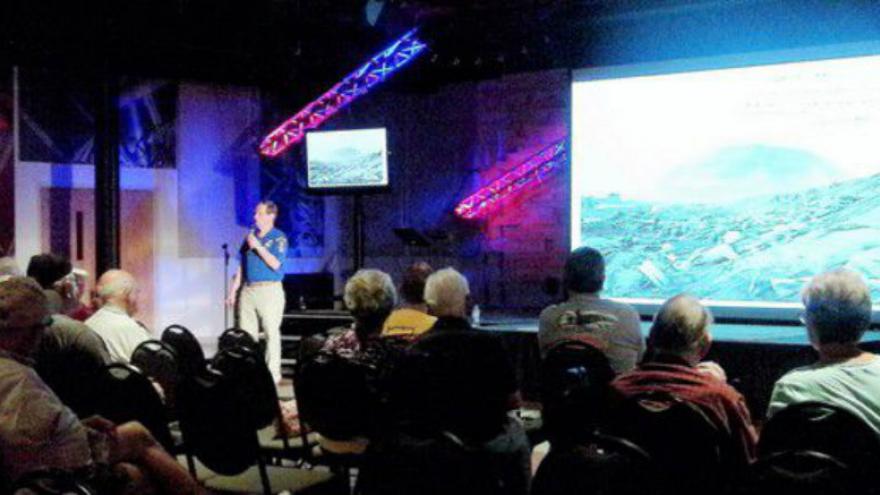 GOSHEN, Ind-- Freedom is not free. Tens of thousands of men and women have died fighting for the freedoms of this country.

Even more come back from war, only to be forgotten.

Soldiers from World War II, the Cold War, the Korean War, the Vietnam War, Operation Iraqi Freedom, the War on Terror and other conflicts fought and continue to fight every day.“They are the people who saved our country,” said Dennis Covert, President of the Honor Flight Northeast Indiana.

Covert was invited to Elkhart County by Goshen resident and Korean war veteran Don Kennedy who participated in the May Honor Flight to Washington. Kennedy expressed the need for HFNEI to have more exposure in the Goshen area and offered to help arrange the program, Covert said in an email prior to last week's presentation at Grace Community Church in Goshen. Jacqueline Letherman, his guardian on the May flight, also from Elkhart County, assisted in setting up the local presentation.

Honor Flight was started in 2005, Covert told those attending Wednesday evening's presentation, by an Air Force captain who had gotten out of the service and was working as a physician’s assistant at the Veteran’s Administration Hospital in Springfield, Ohio.

“As he was making his rounds, he discovered that most of the World War II veterans would probably never get to go to Washington to see their memorials. He was a private pilot, and he got five of his friends who were also private pilots, and together, they put 12 World War II veterans in six planes and they flew to Washington, and that’s how this program began,” Covert said.

In 2008, Laura Carrico, in an effort to honor her father, formed Honor Flight Northeast Indiana. She wanted to put her father on the flight but realized that the waiting list was so long that he probably would never get to go in his lifetime.

“We owe them an honor flight,” Covert said.

The day begins with breakfast in Fort Wayne, served by USO officers.

Every veteran and their guardian will get their picture taken together. (Guardians help to see the veteran through medical or emotional needs of the trip. Every veteran has a guardian.)

The group of veterans and guardians then boards a specially chartered American Airlines jet for the flight to Washington, D.C.

Then they check out the Women’s Memorial and Air Force Memorial and Tomb of the Unknown Soldier at Arlington National Cemetery.

After the tours, the group heads back to Reagan National Airport where patriots, dressed in 1940’s attire, are there to greet them.

On the way back home, the group receives mail call.

Back at Fort Wayne International Airport, hundreds of visitors, flags in tow, create a receiving line for the veterans, who return from their travels around 9 p.m.

“There’s a lot of wet eyes by the time people get through that line,” Covert explained, which can take up to an hour and a half.

There are currently about 600 veterans locally on the waiting list for an honor flight right now, with four flights per year (in April, May, September and October).

Honor Flights allow for 85 veterans and 85 guardians on each flight.

Desert Storm and Iraqi Freedom are welcome to submit applications as well, however, the database for these soldiers is not yet prepared so the wait will be much longer for these individuals.

Flights are free of charge for veterans, and $400 for guardians.

This was taken in partnership from the Elkhart Truth at http://bit.ly/2vD8SAZ