'Hooters' a victim of economy 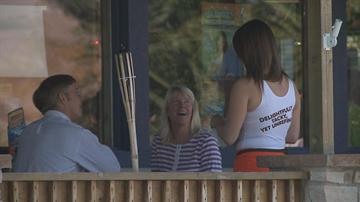 MISHAWAKA, Ind. - On Day Road between Grape Road and Main Street corporate franchises are everywhere you look. Some are winners and some are losers.

‘Hooters’, a staple for the last eight years, is the newest loser. ABC 57 News learned early Thursday morning that the restaurant is closing its doors for good Sunday. According to a corporate spokesperson for ‘Hooters’, sales went down in 2006, the economy tanked and the Mishawaka location never rebounded.

It's an all too familiar pattern in that part of Mishawaka. There are plenty of empty buildings in the district. The old Borders Books building across the Day Road closed over the summer.

According to Jeff Rey, CEO of the St. Joseph County Chamber of Commerce, the Main Street/Grape Road corridor is the second largest retail district in Indiana. There is plenty of competition.

"In 2008 I was concerned like everyone else," says Bob Jaques, owner of 'Ritters Frozen Custard' a couple of doors down from 'Hooters'. 'Ritters' got through the recession with flying colors. "I would judge it since 2008, good," he says.

Jaques says part of the reason 'Ritters' has done so well is the heavy traffic in the area. "Thousands and thousands of cars pass each and every day and they see 'Ritters Frozen Custard' and that makes me very happy," says Jaques.

Jaque says he has had to make some changes to 'Ritters' to beat stiff competition in the business district. Since he bought the franchise he has added a drive-thru and is open year-round.

"There are a lot of choices," says Todd Bookwalter owner of Penn Station Subs, another neighbor of Hooters. Bookwalter says there is so much competition in the district each business has to carve out a niche.

Bookwalter says if a business can do it, the reward is success.

"We know people travel from all over the region to eat here," he says. "Seeing 'Hooters' close, while it might break some hearts, is good news for Bookwalter. We don't sell beer and wings, ours is fries and subs but we're going after the same clientele."