Horse put down after collision with car 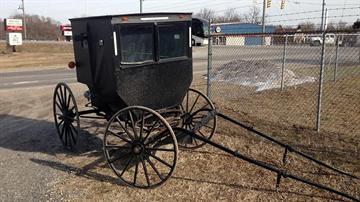 MIDDLEBURY, Ind. -- A car collided with a horse and buggy in Middlebury just after 8 a.m. on US 20 and CR 22 in Elkhart County Monday.

"All of a sudden, I heard this crash and bang and just like that I saw the blood shooting out of the horse,” said buggy driver David Mast.

Mast says the light was yellow when his buggy entered the intersection.

Witnesses say he may be mistaken.

“So far from the investigation, it looks like the horse and buggy ran the red light. The eastbound passenger car had the green light and the right of way,” said Sergeant Robert Baker of the Middlebury Police Department.

The horse and buggy was going about 15 miles per hour when it ran into the driver’s side door of the other vehicle.

"There's some extensive body damage to the roof, the doors, and probably the frame; so it's a good chance the car could be totaled just from the damage with the horse,” said Baker.

With it only going 15 miles per hour, how could the driver of the car not see it coming?

She probably could have braked or pulled some type of evasive maneuver to miss the buggy, however with the sun coming over it was blinding at that time,” said Baker.

The driver of the car walked away from the accident with minor cuts and scrapes.

The horse didn't fare as well. It had to be put down.