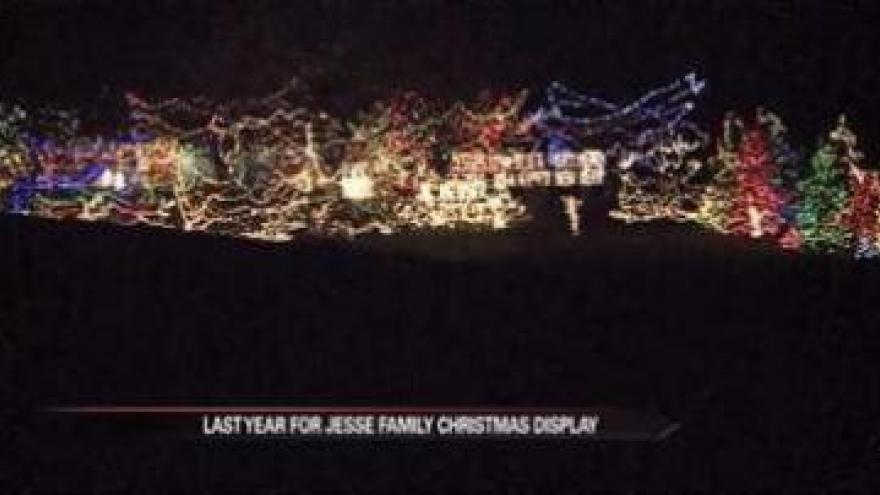 BUCHANAN, Mich.-- The Jesse family in Buchanan gave the gift of light to the small town for the past 30 years. But that will soon change.

Jim Jesse has been decorating his yard since 1982. In those 30 years, his corner lot display has grown to a massive 120,000 lights.

But it's become a tradition for Jesse as well. One that he's sad to see come to an end. But he said he just can't work the long hours with his hip and knee problems.

Checking the light strands for bad bulbs takes him three weeks. This private attorney said he's no electrician, but you wouldn't know it by his home set-up.

"A few years ago we put up another 200 amp electrical service to take care of all the things so we now have 34 circuits," said Jesse.

He said the price of that six-week electricity bill is worth it.

"They come on the day of Thanksgiving and get turned off on New Year's Day and that's the best $1,100 I could possibly invest. It really is."

His eleven-year-old neighbor is praying he changes his mind and keeps investing.

"I mark it as a close-point to home," said Jacob Aalfs. "It's like a marking point to me so when I won't see them there anymore it's gonna make me a little sad."

He asks his mom to crawl past the home every night. He said no one speeds by this display.

The Aalfs family said even if their neighbors don't change their minds, there's still time to see the display, at least for one more Christmas.

"I would tell anybody who hasn't seen it that they need to come out here and see it because it's an amazing spectacular thing that he's done over the years and it's going to be greatly missed by many people in this town," said Kimi Aalfs, neighbor.