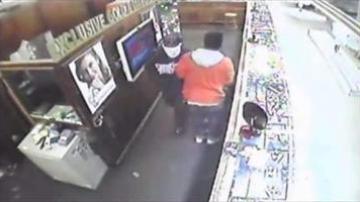 HOUSTON, Texas. -- Houston police are on the lookout for about 10 robbers who stole a million dollars worth of jewelry and cash from a flea market on Black Friday.

Here you can see a group of about 10 men storm in just before closing time. Police said the group forced the armed security guard to the floor.

They cuffed him took his gun and ransacked the building. Then police say the men forced people inside to get on the ground while pointing guns to their heads.

Police say it only took the men four minutes to make the steal.