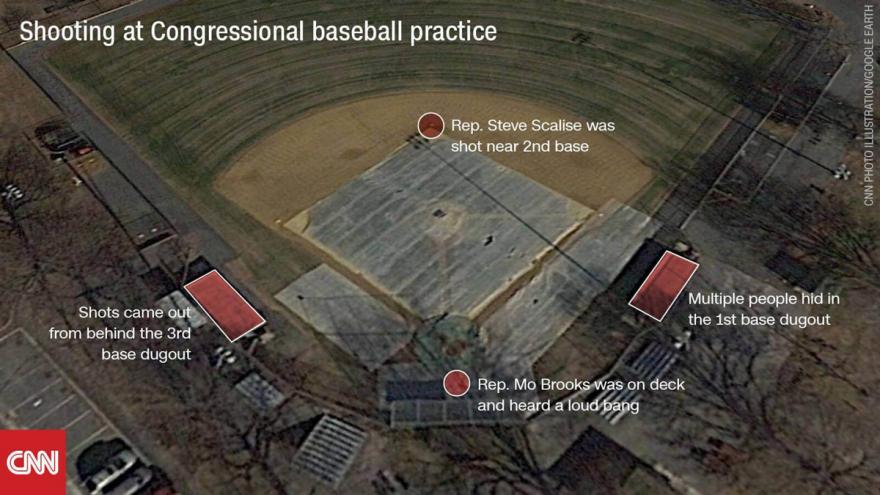 (CNN) -- All they expected to hear was the crack of bat on ball.

But with one loud blast of a gunshot, early morning batting practice turned to terror for Republican lawmakers, staffers and one small boy, as a lone assailant sprayed bullets across a baseball diamond, sending them fleeing for their lives.

Their unimaginable ordeal in the line of fire unfolded over 10 terrible minutes at a neighborhood field in Alexandria, Virginia, as players piled into dugouts seeking shelter, armed only with bats to repel bullets.

Trapped, as a war zone scene played out before them, they watched helplessly as a wounded colleague, House Majority Whip Steve Scalise, dragged himself along the ground -- leaving a trail of blood on the infield.

Shaken and emotional, they later admitted they owed their lives to the heroism of pistol-wielding police officers who stood up to a barrage of automatic fire, eventually mortally wounding the gunman, even after they themselves were hit.

And as President Donald Trump called for unity, Washington's political players and their chroniclers were left to question the viciousness of a political culture that may have spawned such a ferocious attack that injured Scalise, a congressional staffer, two police officers and a lobbyist playing with the team.

Alabama Republican Mo Brooks was just about to hit on a warm morning just after 7 a.m., as lawmakers limbered up for Thursday's always-popular congressional charity game at Nationals Park, home to the city's professional baseball club.

"Then I hear another 'Bam!' and realize there's an active shooter. At the same time, I hear Steve Scalise over near second base scream. He was shot."

"I was batting. We heard a loud noise -- felt like a construction site and somebody dropped a big piece of metal and someone on the field yelling 'Run, he's got a gun.'"

Eyewitness Marty LaVoie's first thought was how out-of-context it was to see someone open fire on a ball field.

"I looked over and saw a man behind third base. I saw this long weapon -- what went through my mind is, why would anybody have a rifle shooting birds at a baseball practice?" he said.

"Someone in the dugout literally saved my life because they said stay down."

Another witness, David Woodruff, was out for his morning run, and remembers thinking it was early for people to be practicing baseball.

Kentucky Sen. Rand Paul said on CNN that bullets were flying everywhere and that a congressional staffer climbed a 20-foot fence in three seconds and flopped down beside him near a big oak tree behind a batting cage.

"The gunshots were going into the warning track about five or 10 feet from us and at some point I'd say 50 or 60 shots at least had been fired from the shooter," Paul said.

Scalise had been playing second base, opposite the third base dugout area from where the gunman, later identified as Illinois man James T. Hodgkinson who vehemently opposed Trump, appeared to be firing from.

As the gun battle raged between Hodgkinson and Capitol Police officers on Scalise's detail, his colleagues watched as the majority whip floundered.

"He dragged himself off of infield into outfield and there was a trail we could see where he had been," said Arizona Sen. Jeff Flake, who later arrived on Capitol Hill still in his cleats, and recalled gunshots kicking up the dirt.

Brooks also noticed Scalise was in trouble: "He had crawled into the outfield, was leaving a trail of blood."

Scalise "was not able to move on his own power. He was dragging his body from the second base infield, where it's dirt, to the outfield to get away from the shooter while all this firing was going on," Brooks said.

Hours later, Davis reflected on the horrible experience of seeing his colleague exposed and being unable to help as bullets flew.

"I watched my friend and my fellow member Steve Scalise lay motionless on the field, wondering if he was going to be OK. That is a picture I will never forget."

After Scalise was cut down, fellow players and onlookers rushed for safety.

"The fear factor was horrific, because by the time I got into the dugout I saw several other members bleeding," Tennessee Rep. Chuck Fleischmann told CNN.

"I saw one gentleman who had been shot in the leg. There was blood all over and it was horrible, but we did not know when it was going to end."

Ohio Rep. Brad Wenstrup, an army veteran, later told an aide the shooting was "like being in Iraq again, only without his weapon."

Huddled in the dugout, the lawmakers tried to protect the 10-year-old son of Texas Rep. Joe Barton: "We got him in the dugout, we put him under a bench," Flake said.

The Arizona senator, later cleaned up and wearing a suit, told CNN of the moment he came face-to-face with the shooter.

"I wanted to get out to where Steve Scalise was to see if we could drag him over to the dugout, so I stood up and the gunman was there just behind the fence behind home plate.

"He caught sight of where I was, and so we quickly a bunch of us jumped down so as not to be in the line of fire."

Fleischmann told of his own lucky escape.

"I had to walk right past him when I walked past third base from left field. He just decided not to shoot me, so, I was very fortunate," Fleischmann said, relating how he took cover in a dugout, fearing for his life.

"We were scared because when the gunfire didn't stop we thought, 'Oh my gosh, he's gonna come in there, and we're like sitting ducks,'" Fleischmann said.

Brooks told CNN that he saw "one of the good guys" -- a member of the Scalise security detail "blasting away."

"It was pistol versus rifle along the third baseline just outside the chain link fence and he was ordering us to stay down. Another security detail person was closer to home plate, probably."

Brooks remembered the moment when the horror ended.

"And my understanding is that's where our security detail ... took him down."

With the shooter immobilized, thoughts again turned to Scalise. Wenstrup, a physician, got to work to try to stem the bleeding.

Brooks said that he helped by putting pressure on the wound as his colleague used scissors to cut Scalise's clothing. Flake said Scalise was conscious the whole time and asked for water before he was taken away in a helicopter.

Many of those on the scene reflected how they owed their lives to the officers in the Scalise detail.

Flake noted that the gunman had a lot of ammunition, and things could have been so much worse.

"It would have been a horrible scene ... if he makes it there to the dugout, then you're in trouble."

South Carolina Rep. Jeff Duncan had just left the practice when a man believed to be Hodkingson came up to him.

"Someone in the parking lot who asked me if the team practicing was a Democrat or Republican team. I told him they were Republicans," he said.

This being Washington, politics quickly broke out, with New York Rep. Chris Collins blaming anti-Trump rhetoric from the left for the warped public debate that led to the shooting. Twitter fights, predictably, soon raged.

But others began to contemplate whether the bitter tone of the public square and root, root, rooting for the home team in politics had gone too far, as normal political barriers, for once, came down.

"This has to be the breaking point. Is this America's breaking point when it comes to the political rhetoric that's become so hateful?" Davis asked. "I never thought I would play a baseball game for charity, go to practice at 6:30 in the morning and have to dodge bullets."

Rep. Richard Hudson isn't on the team and was leading a Bible study group when the shooting happened. But he was particularly moved that an "Indivisible" anti-Trump group in his district in North Carolina posted that they were glad he was safe.

"That really meant a lot to me," he said adding it made him want to reconsider his relationship with them.

Rep. Pat Meehan of Pennsylvania, a pitcher on the team, who was not at the practice, choked back tears as he spoke of his teammates.

"It's one of the things that makes you feel more normal. The camaraderie that we have in the mornings," he said.

He got emotional again when describing how a Democratic member, Rep. Tim Ryan of Ohio, came up to him Wednesday morning and gave him a hug.

"It tells you how much we share," he said, fighting back tears. "It's a good thing we don't want to stop."

Among the most poignant of comments came from someone who knows what the lawmakers felt when they were under fire.

"This shooting is an attack on all who serve and on all who participate in our democracy," said Gabrielle Giffords, a former Arizona representative who was shot in 2011.

Back in Alexandria, meanwhile, the ball field had become a crime scene, with discarded bats and equipment laying on the ground, hinting at the story of how a normal, early morning practice suddenly turned into 10 minutes of terror.