How does the first frosts affect Michiana?

NOW: How does the first frosts affect Michiana?

You may have been getting annoyed about the bees around Michiana by the tail end of the summer season, but that problem will be clearing itself up over the next couple of weeks. Morning lows took a dive over the weekend, reaching 32 degrees for some Saturday morning, prompting our first widespread frost event. When temperatures get this cold, it's actually life-threatening for the bees. They typically like to operate in temperatures between 100 and about 57 degrees. But, once temps drop below 50 degrees, it's time for the bees to head inside. When the air gets near freezing, it'll kill the bees if they're outside. 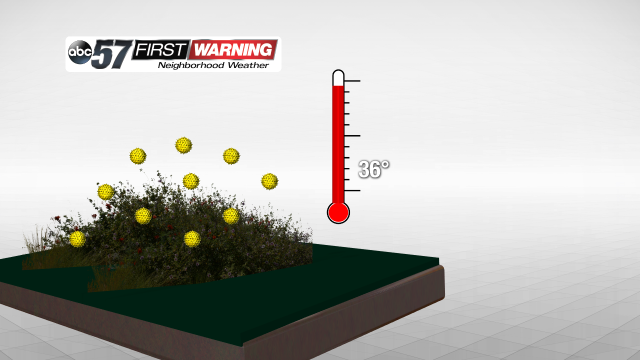 That's because they're cold-blooded, so they can't generate their own body heat. So, what do they do in the winter months? Well, like us they get inside their hive and huddle together for warmth. They also flex their wing muscles in order to stay active and warm, and they ride out the winter until spring arrives. 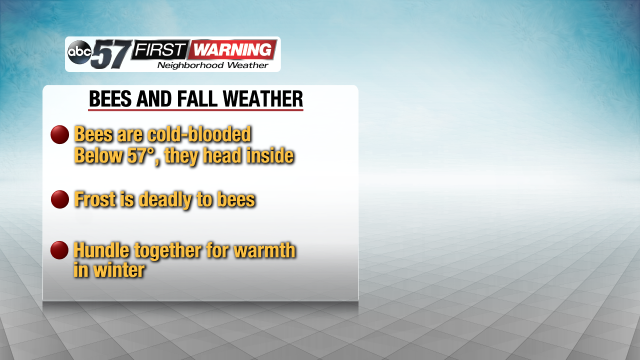 Now that temperatures are starting to dip into the freezing category, allergy season and even the mowing season are coming to a close. Fall allergies typically come from ragweed as they spew pollen into the air late in summer to fall. But, once the first frost comes around, those plant really start to die and decay. Be aware that some pollen can still be pushed around by the wind, but, overall, a lot of the sniffling and sneezing will be gone in the next few weeks.

And the lawn mowing season is basically done as well, thanks to the first frost, as the temperature falls more consistently into the 30s and more frost events become common, warm season grasses become dehydrated. What keeps them green isn't the warm summer temperatures; it's the amount of water we get in the summer season. As the air becomes colder, it becomes much drier as well. That's because cold water can't hold as much water vapor, compared to warm air. So, lawns will turn brown as they go dormant in order to conserve water. Lawn mowers should be done for the year, and it's a good idea to keep the grass a little longer than normal, in order to protect the bottom of the blade of grass closest to the ground, which is the vulnerable part of the plant.