How EPA proposal would affect consumers not known 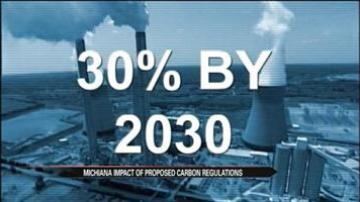 SOUTH BEND, Ind. -- The Environmental Protection Agency proposed the Clean Power Plan on June 2. The plan would keep energy affordable while cutting carbon emissions. In the proposal, power plants would have to reduce carbon emissions by as much as 30-percent.

About 85-percent of the electricity in Indiana is generated by coal-fired power plants. The proposal would have an impact on how local utilities do business, but whether or not it will affect rates is unknown.

In 2012, power plants accounted for 32-percent of greenhouse gas emissions in the US.

By 2030, power plants must cut their carbon emissions by 30-percent, if the proposal is approved.

Bergsma says it's too early to tell just how much of an impact the proposal will have on utility companies, but I and M is already looking at ways to lessen the blow.

"I and M already has 36-percent of its generation portfolio emission free. We also have invested $10 billion across the AEP system," said Bergsma.

The utility company plans to close at least one of their Southern Indiana coal burning facilities by 2015.

As far as Michiana goes, there are two coal power plants - one at Notre Dame and one in Michigan City.

Both release a significant amount of carbon dioxide into the air.

"We have reduced our greenhouse gas emissions over the years from other measures," said Nick Meyer, Director of External Communications for NIPSCO.

Meyer says they're currently evaluating ways to lessen that even more,  but NIPSCO, Notre Dame and I & M all stopped short of discussing what this means for customers.

The number one question people have is will this increase their utility bills?

"It's too early to speculate on what impact that will have," said Bergsma.

The proposal hasn't been approved yet, so the limits could change.