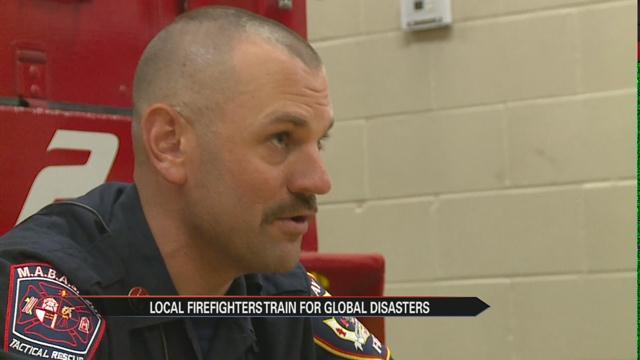 As rescue teams across the country head to Nepal, ABC 57 looked into the local teams of men and women who have been the boots on the ground in dangerous situations.

Some of the firefighters at Clay Fire are specially trained to respond when natural disasters hit, they're a part of the tactical rescue team.

“I know I can do this, I'm a guy that can do this, this is what I was meant to do,” says Captain Lucas Gluchowski of the Clay Fire Department.

Gluchowski has spent hours upon hours of rigorous training to be a part of the Homeland Securities All Hazards and Management Team.

Firefighters from all over Michiana make up this special force. Meaning, whenever there's a natural disaster, they're prepared to help.

“We will have boots on the ground right away,” says Gluchowski. “This is like the SWAT team of the police department, this is the special forces of the military. This is the cream of the crop.”

The force is equipped with a special truck filled with all of the necessary equipment to help save lives.

Gluchowski says he remembers when he and his team took the rig to the east coast for Hurricane Sandy.

“It was pouring down pretty good,” says Gluchowski. “There was just debris all over the place.”

That trip is a memory he proudly wears on his shirt every day.

“You were in awe when you got out there,” says Gluchowski.

The Clay Fire Captain says he kept his eye on the job to help.

“We had to set up a kind of makeshift hospital out there,” says Gluchowski.

And after all was said and done, the feeling of accomplishment, kicked in.

“The people were very thankful we were there,” says Gluchowski. “You're there to help them and that was a great feeling.”
Share this article: