How the weather will affect the South Bend Cubs

NOW: How the weather will affect the South Bend Cubs 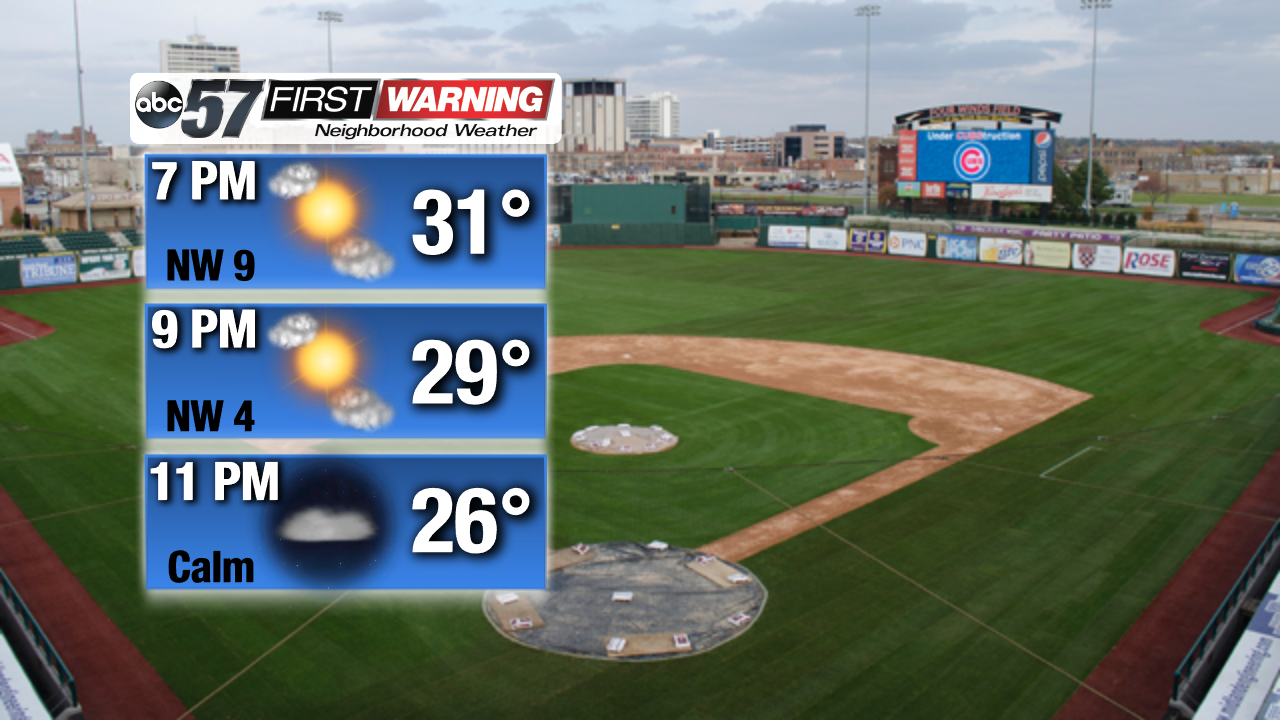 Opening Day forecast for the South Bend Cubs
It's finally time for some baseball in South Bend! The South Bend Cubs' home opener is tomorrow, April 7th. First pitch is scheduled to occur at 7:05 PM. If you plan on heading to the ballpark be sure to dress as if it is January, though. It is going to be very chilly for this time of year. High temperatures will only reach the lower 30s during the afternoon, with game time temperatures falling into the upper 20s under mainly clear to partly cloudy skies. The good news is the winds will subside after the first couple of innings. That will play as a positive by eliminating the wind chill factor to an extent. 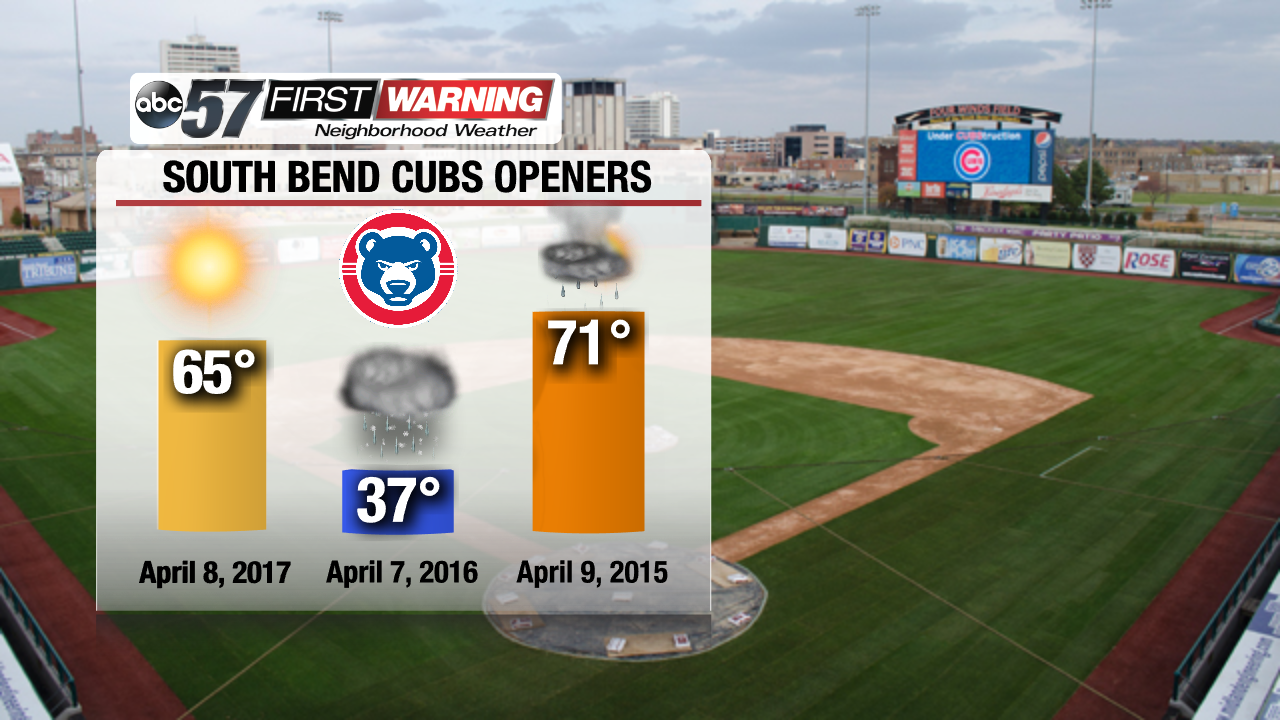 Weather conditions for each of the Cubs' first three home openers
Despite the cold temperatures, it will be dry. The same cannot be said for the home opener in 2016. Not only was that game cold, but there was both rain and snow throughout the day! In fact, a trace of snowfall was measured in South Bend that day. So the weather we are preparing for isn't anything out of the ordinary for early April. The trend for home openers after Saturday's game is over will be warm, cold, warm, cold. Thus, if you're planning ahead for 2019's home opener, we should see warmer temperatures, if the pattern holds true. 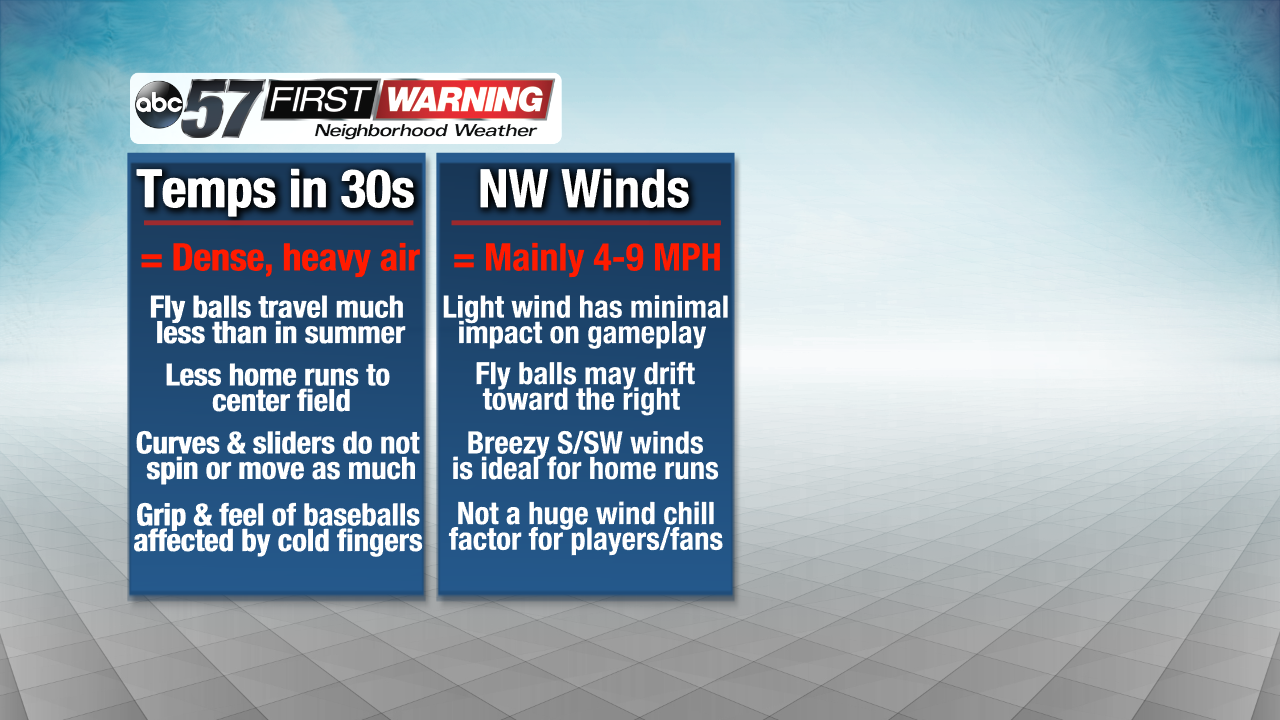 Saturday's cold weather will not only affect fans, but players will see effects as well. When temperatures are cold, the air is heavier and more dense. This plays a role in how fly balls travel; when hit into the air, a baseball will travel the farthest when temperatures are hot and humidity values are low. The exact opposite can be said when temperatures are in the 30s. A good expectation to have would be less home runs hit by both teams. Cold air also plays a role for pitchers. Curveballs and sliders do not break as much when the air is heavy and dense. In other words, they don't spin or move as much, making them less effective against opposing hitters.

The other side of the equation is wind speed and direction. Winds will be coming out of the northwest throughout the game with speeds ranging from 7-11 MPH through the first few innings to 3-8 MPH for the later innings. Overall, those are relatively light speeds, and most effects on the game would be negligible. However, it is possible that any ball hit into the air during the early innings will drift slightly toward the right side of the field due to the orientation of Four Winds Field. Winds coming from the northwest don't have much of an impact on the tendency for home runs to be hit. If you are wanting to attend a Cubs game in which the probability of home runs is higher than normal, attend a game where south or southwesterly winds are expected!