How will schools make up for $10.6-million budget shortfall? 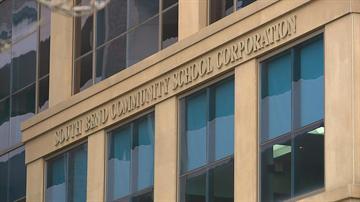 SOUTH BEND, Ind. – The South Bend School Corporation needs to make up for a $10.6-million budget shortfall and officials continue to consider what cuts will need to be made.

After meetings last week the school board released a list of 25 possible cuts the corporation could make to adjust for the shortfall which has been attributed to cuts in state funding and the loss of hundreds of students to private schools.  Among the options listed are pay cuts, layoffs, the closing of some schools, cutting some programs and reorganizing offices.

“What was generated last week is simply a list, options that the board will consider,” explained Superintendent Dr. Carole Schmidt after the school board’s meeting on Monday night.

For the immediate future, Schmidt explained that the school board is waiting to see how many teachers and other staff members will retire.  The list of possible cuts to make up for the shortfall included a proposal to cut 75 teachers, but Schmidt explained the hope is that the majority of those teachers will retire and thus limit the number of teachers that will have to be fired.

“That includes like 50 retirements, so it’s not like we’re going to lay 75 teachers off,” Schmidt described.  “We’re counting on that number of people to be taken out of the general fund.”

Schmidt explained that some teachers will be replaced, but for lower pay to help tighten the budget.  Currently the corporation is reviewing their staff needs that will also help them get an idea of how many jobs will be needed and how many can be cut.  In the past, Schmidt had said she wished to avoid making cuts that affected students, but on Monday explained that may not be possible.

But, the tough cuts have yet to be made.  Schmidt said the corporation and the school board would have to wait until they get a better idea of how much money they’ll be able to save through staff retirements and the level of state funding they’ll receive.

The cuts will not be made immediately.

“If we close buildings, that will play into next year’s 2013/2014 budget and so all that will be together,” she described.  “We’re not looking for $10-million in the next three months.”

According to Schmidt, decisions about cuts could begin to be made at the school board’s meetings in May.