Huge brawl breaks out at a Terre Haute courthouse 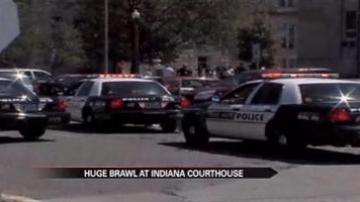 TERRE HAUTE, Ind. -- A huge brawl broke out at an Indiana courthouse just after a hearing on Tuesday morning.

People began punching each other in the gallery and one man even threw a chair.

Then other people began fighting outside the hall and even on the courthouse lawn.

The fighting brock out because of a deadly shooting last week outside of a Terre Haute bar.

"There's a victim's family, and they're all upset by," said Prosecutor Terry Modessit. "You know, especially in the murder case."

Police were able to break up the fight.

No one was hurt in the fight.