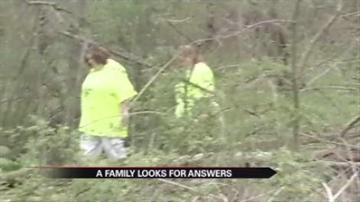 MICHIGAN CITY, Ind. --  The police investigation continues in Michigan City after human remains were found in the woods on the corner of County Line Road and Chandler Avenue.

While police still are not releasing any information to the media, clues from family members all point to Candi Brown.

The twenty-nine-year-old mother of three disappeared in August.

“We got as close as a quarter of a mile down the road,” said Moms on a Mission founder, Christine Salzer.

Christine Salzer and her search team, Moms on a Mission have been searching for eight months for 29-year-old Candi Brown.

After searching all over the town of Pines, they were just about to hit the County Line Road and Chandler Avenue area, when police got a call of a gruesome discovery in the neighboring woods.

“It was skeletonized remains,” said Salzer.

Although the autopsy report has not come back yet, due to the small amount of people that have disappeared from the small town of Pines, Salzer and Brown’s cousin James Edwards firmly believe it is Candi Brown.

“There were three women that went missing a couple miles from here but that was in the 1960’s,” said Salzer.

“There are only a handful of people that have gone missing in the area,” said Brown’s cousin James Edwards.

After police contacted Brown’s mother, Salzer says she is even more convinced, especially because detectives are ramping up their efforts to find Brown’s killer.

Salzer and Edwards say they hope they are wrong about the remains, but if they are not, they are ready for some closure.

“We are sad. This is not the outcome that we wanted,” said Salzer.

“If it is, it is a good thing and a bad thing because we can start the grieving process,” said Edwards.

We did reach out to Candi Brown’s husband, he did not want to appear on camera.  But he did issue a statement, he said he is hoping and praying that the remains are not his wife. He also said if it is, it is.