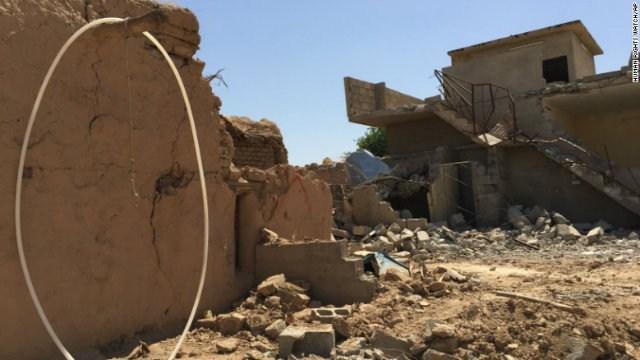 Kurdish Regional Government forces, also known as the Peshmerga, is a 100,000-strong military force, backed by the United States in its mission to drive out ISIS from Iraq.

The US-based human rights group released a report Sunday detailing at least 21 attacks carried out by Kurdish fighters on villages with mixed Kurdish and Arab residents between September 2014 and May 2016 in disputed parts of Kirkuk and Nineveh, governorates in northern Iraq. Researchers spoke to witnesses on the ground and say they found destroyed Arab buildings next to intact Kurdish-owned ones.

"In village after village in Kirkuk and Nineveh, KRG security forces destroyed Arab homes -- but not those belonging to Kurds -- for no legitimate military purpose," said Joe Stork, deputy Middle East director at Human Rights Watch.

Satellite imagery from 62 villages show evidence of destruction after Kurdish forces recaptured them from ISIS but a lack of presence on the ground in those areas make it difficult to independently confirm if they were indeed destroyed by Kurdish troops.

In one incident in May 2016, residents in Qarah Tappah, a village west of Kirkuk city, said they saw Kurdish officials marking at least two dozen homes belonging to Arab residents who had fled with an "X" sign to later be bulldozed by Kurdish forces. Villagers also told HRW they saw Kurdish security officials looting an Arab farm -- taking livestock and thousands of dollars' worth of crops.

Dindar Zebari, head of the KRG Foreign Relations Department's Committee to Evaluate and Respond to International Reports, spoke directly to the incident in Qarah Tappah. He said that 18 of the homes in question belonged to ISIS fighters and some were booby-trapped with improvised explosive devices, which would have been difficult for the troops to dismantle.

HRW says the demolitions of targeted homes were not directly related to military operations against ISIS and therefore count as unlawful destruction of civilian property under the Geneva Conventions. The group also cites incidents in which destroyed homes were in areas that ISIS never captured and therefore could not have contained IEDs.

The report puts into question whether the Kurdish Regional Government actually intends for Arab residents who fled during the fighting to return to their villages. KRG President Masoud Barzani told HRW in July that his forces would not allow Sunni Arabs to return to villages that were "Arabized" by former President Saddam Hussein. In his view, those are historically and rightfully Kurdish lands and potentially part of a future independent Kurdistan, which Barzani has long championed.

Kurdish officials are strongly denying any systematic destruction of Arab-owned homes. KRG Spokesman Safeen Dizayee told CNN that HRW's report is imbalanced and does not reflect the reality on the ground. He added that the notion of a deliberate policy to target Arab property is "absolutely ridiculous" and that many of the homes were destroyed by either airstrikes or ISIS fighters.

HRW is calling on countries supporting the KRG, including the United States and Germany, to pressure Kurdish officials to investigate their forces for the destruction of civilian property, amounting to possible war crimes.