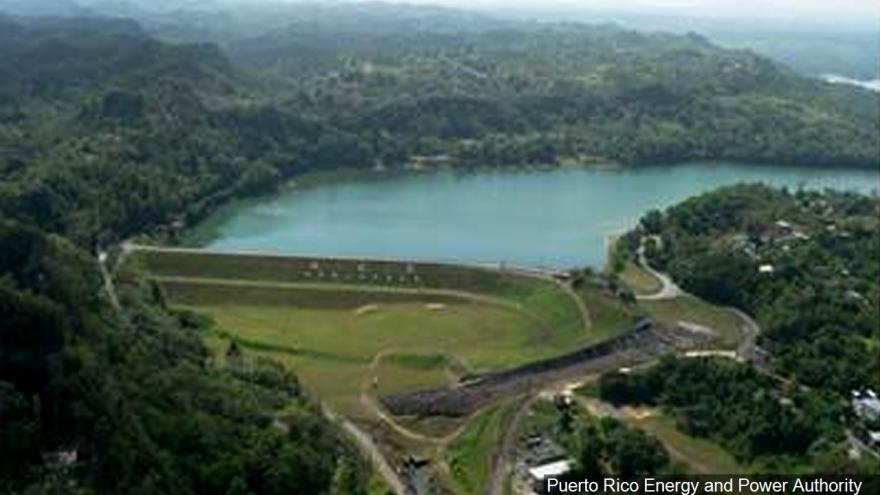 (CNN) -- A damaged dam is in danger of bursting. Most buildings are damaged or destroyed. Millions are without power, and the communication network is crippled.

Puerto Rico is in a dire situation after Hurricane Maria, Governor Ricardo Rosselló told CNN in an interview on "New Day" Monday morning.

"This is a game changer," he said. "We need to prevent a humanitarian crisis occurring in America."

Rosselló urged Congress to approve a commensurate aid package as the US territory, already hammered by a prolonged economic crisis, tries to get back on its feet.

"Puerto Rico is part of the United States, and we need to take swift action," the governor said. "This is a major disaster."

President Donald Trump has pledged federal help for Puerto Rico and the US Virgin Islands. A White House official said Trump is planning to visit Puerto Rico, but a date has not been set because of infrastructure concerns on the island.

The Puerto Rico Federal Affairs Administration said 4,000 members of the US Army Reserves have been deployed to the island to help with Hurricane Maria recovery.

Airplanes and ships loaded with meals, water and generators have been arriving or are headed to Puerto Rico and other affected Caribbean islands, the Federal Emergency Management Agency said in a statement.

"We need something tangible, a bill that actually answers to our need right now," Rosselló told CNN in calling on Congress to take action.

The territory's population was down to 3.4 million residents last year from 3.8 million in 2004. High unemployment and better jobs elsewhere have led many Puerto Ricans to leave, mainly to Florida and Texas, according to the Pew Research Center.

The Guajataca Dam in the island's northwest corner is releasing water after suffering a "critical infrastructure failure" following the Category 5 storm.

"Some of the dam has fallen apart," Rosselló said. "Now we are making sure that we can assess if the other part will fall down as well. It represents a great danger for about an estimated 70,000 people."

Residents below the dam were told to evacuate on Friday, according to the National Guard. With more than 95% of wireless cell sites out of service, authorities had to physically go to thousands of homes to warn people of the potential collapse.

The governor also got a first-hand look when he went officials to assess the situation Friday.

Rosselló said that while most people in the vicinity had evacuated, efforts were still underway to get people out in peripheral areas.

"My action has been to order evacuation," he said. "I'd rather be wrong on that front than do nothing and having it fail and costing people their lives."

Without power and communications in much of the island, millions of people, including city leaders and first responders, have been cut off from the world since Maria hit Wednesday.

"Essentially only the metropolitan area has infrastructures, " the governor said Monday, adding that their priority is to get antennas into areas that are still not communicating.

After flying over Puerto Rico Sunday, CNN's Leyla Santiago said residents could be seen along the highways searching for a cellphone signal.

"The island from above is a completely different color" due to the lack of trees, Santiago said, while pools are filled with black water and debris. The storm ripped the roofs of houses, exposing their interiors to the sky, she said.

Authorities who flew over the island Saturday were also stunned by what they saw. Roads are completely washed away and others are blocked by debris, isolating residents.

"It was devastating to see all that kind of debris in all areas, in all towns of the island," Jenniffer González, the island's non-voting representative in Congress told CNN.

"We never expected to have a lot of debris in so many areas. A lot of roads are closed, older ones are just gone," she added.

At least 10 people have been confirmed killed by the hurricane.

A doctor at Canovanas Medical Center -- one of the few hospitals with a working generator -- said they were running out of fuel to keep it going. Dr. Norbert Seda told CNN that the center only had 2-3 days left of medical supplies and medicine.

None of the three hospitals CNN visited had running water and all said they had just days of supplies left.

However, earlier, the Gov. Rosselló guaranteed that the people of Puerto Rico would have access to enough food and water to survive.

"We have centers that will distribute water and food, we've already started getting shipments. Today, as a matter of fact, we had a million liters of water come in to Puerto Rico. We have half a million servings of food and other resources." Rosselló also said the island has enough fuel for the next 20 days.

Roselló met with more than 50 mayors and representatives from across Puerto Rico on Saturday. Some described the conditions in their communities as "apocalyptic" and said there have been incidents of looting in both homes and stores.

Meantime, the US East Coast bracing for high winds and treacherous surf from Hurricane Maria, days after the storm caused widespread devastation in the Caribbean.

Early Monday the National Hurricane Center said Maria was expected to pass "well east" of the southeast coast during the next day or so.

"The combination of a dangerous storm surge and the tide will cause normally dry areas near the coast to be flooded by rising waters moving inland from the shoreline," the hurricane center warned, adding that dangerous swells were expected to increase along the Mid-Atlantic coast.

Hurricane Maria also hammered Dominica, the Dominican Republic, the US Virgin Islands and the Turks and Caicos, a British overseas territory.