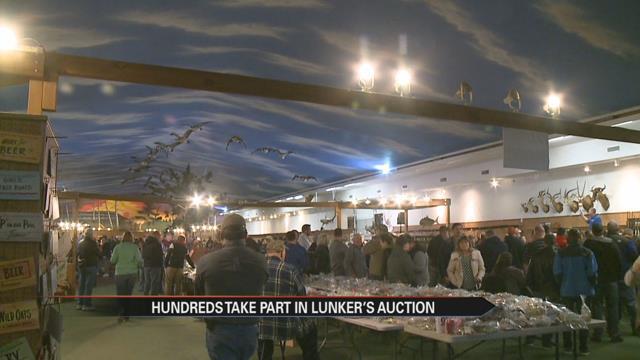 Hundreds of people spent their Saturday in Edwardsburg taking part in an auction to empty out Lunker’s bait shop and Angler’s Inn Restaurant.

“It’s awesome,” Mark Cramer said of the turnout. “It’s more than I expected.”

Saturday was the first of three auction days taking place to clear out the former Edwardsburg landmark destination.

“Get some good deals; see it for the last time before the doors are totally closed,” Lisa Piper said, when asked why her family drove about an hour from Leesburg, IN to visit the auction.

The popular outdoors shop and its built-in restaurant has sat frozen in time since it closed unexpectedly last June.

“I was shocked,” Cramer, who used to visit Lunker’s twice a month, said. “I hate to see ‘em go, but their loss is my gain.”

Cramer walked away with about $500 worth of hunting gear for just $100. He said he would be back for more.

Despite some great deals, the auction represents a lot more for people who used to frequent the unique shop.

“We’re gonna miss it,” Mark Snyder said, adding it was bittersweet to be at the auction.

Many participants said they missed Lunker’s because it brought families together.

The auction continues into Sunday and Monday, starting at 10 a.m. both days. Camping gear and display items will be up for grabs Sunday and a variety of kitchen and restaurant equipment will be available Monday.

A member of the auction team estimated that more than 1,000 people had attended the auction as of Saturday afternoon.