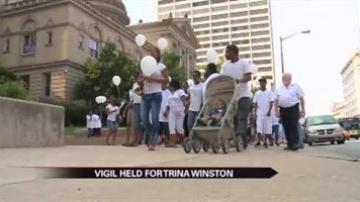 South Bend, IN -- When Derrick Gene-Weaver found out his sister Trina Winston was missing, he was hurt. But those feelings have changed, and now, he just wants to celebrate her life.

"I'm rejoicing for her life," Gene-Weaver said. "The life that she had."

Winston was last seen last week after she went to pick up some of her belongings from her estranged husband, Tarrence Lee.

Police think Lee murdered her there, but a body hasn't been recovered.

"We need the police department to get up, and go out, and search," Gene-Weaver said. "Let volunteers come out and search for her."

And that's the message friends and family want to get across.

She was like a sister to me, one friend said at a candlight vigil in her honor. Crowds chanted "bring her body home!"

"We're asking for the family to have some peace," Gene-Weaver said. "And then for the judicial system to do it's job."

Weaver said Lee has a criminal record, and he's hoping this time around, he'll be punished more harshly.