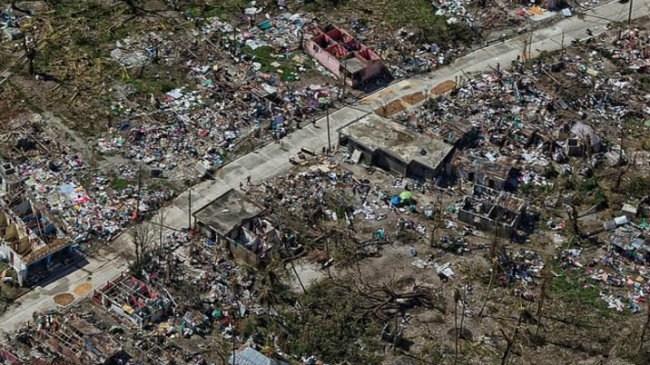 The 35-year-old squats in the corner of his bedroom with his arms over his head, re-enacting how he, his wife, two children and elderly father cowered as nature unleashed its fury.

Today, the family is sleeping in a shelter on the other side of town, their 11-year old daughter sick with a fever she contracted after the storm.

In the meantime, Saint-Plux, who made a living as an English interpreter, is trying to figure out how to scrape together enough money to rebuild the roof of his house and keep his two children in school. It's a challenge facing nearly everyone in this devastated coastal town.

"This same thing happened to all my neighbors," he says, pointing across the street.

The trees were the first casualties. Entire forests on the mountainous northern coast of Haiti's Tiburon peninsula have been leveled.

A week after the hurricane made landfall, aid workers say there are communities still cut off from the outside world because of roads blocked by debris.

For that reason, doctors at Saint Antoine Hospital in Jeremie are expecting many more patients in the days ahead, as people injured in the deadly storm trickle in from the countryside.

The hospital is struggling to operate. The hurricane decimated the top floor of the main building, which was constructed in 1923. An inch of water stands in the main hallway, amid scattered hospital gurneys and ruined medical equipment.

"We need antibiotics and anesthetics," says the director, Conception Panfille.

She says no humanitarian assistance reached the hospital in the week after the storm.

"We see lots of planes," she says, as a pair of US military helicopters buzz overhead. "But we haven't gotten anything."

The crude airstrip for Jeremie is about 20 minutes' drive from the town, past a twisted landscape of felled trees, partially collapsed houses, and Haitian families trying to recover their rain-soaked belongings from the ruins of their homes.

On Monday morning, two double-rotor US Army Chinooks roared onto the airstrip. Accompanied by armed Haitian police officers, US soldiers hauled huge bags of rice and boxes full of waterproof plastic tarps off the aircraft.

US cargo flights have delivered 480 metric tons of relief supplies to the island nation since Saturday, while the United Nations says it is moving food rations, water purification kits and vaccines for cholera to the stricken area.

But the assistance is a drop in the bucket. The World Food Program estimates the storm destroyed 100% of the crops in this agricultural area. There are more than 468,000 people living in and around the storm-tossed town of Jeremie. The Haitian government estimates 2 million people have been affected by the hurricane.

CNN witnessed frustrated Haitians setting up a barricade on the main road between Jeremie and the airstrip. Several angry young men refused to let vehicles through, claiming aid organizations were shipping humanitarian assistance but not sharing it with residents.

There have been many reports of similar roadblocks affecting aid convoys in other parts of the Tiburon peninsula.

"You have to pass through different places where a lot of the population has been affected very hard by Matthew," explains Massimo Miraglio, an Italian priest who has lived for a decade in Jeremie.

"They will stop the trucks and they will ask to have all the aid," he adds.

But most survivors don't appear to be waiting for help from the outside world.

In neighborhoods of Jeremie where homes were splintered and shattered, the sound of hammers and saws fill the air as men labor under the tropical sun, rebuilding their homes and shops.

On the town's waterfront, women in floral dresses joined alongside dozens of silver-helmeted police officers, sweeping up debris.

After the most powerful hurricane this country has seen in generations, the grassroots effort to recover and rebuild has already begun.