Hurricane Irene: NYC turns into a ghost town ahead of storm 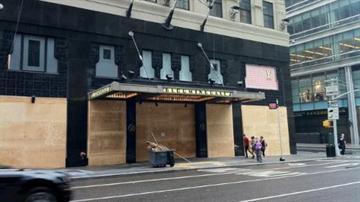 Some 370,000 New Yorkers are fleeing for higher ground today after Mayor Michael Bloomberg announced the city's first evacuation due to hurricane conditions Saturday, leaving parts of lower Manhattan looking like a ghost town.

"It is better to take precautions and get out of the storm. Mother nature is much stronger than all of us," Mayor Michael Bloomberg said Friday.

Low-lying neighborhoods from Battery Park in southern Manhattan to Coney Island and the Rockaway beaches were ordered to evacuate. City workers entered high-rise housing projects to deliver the message personally, while police used bullhorns to warn people to leave.

On Saturday morning, residents awoke to find garbage cans overturned on the street in preparation for the strong winds. Grocery stores were flooded with people scrambling to stock up on last minute supplies and food.

"The super market was a mob scene," said a Lower East Side resident who asked to remain anonymous. "Many shelves were empty. The milk and eggs were sold out. I had to go to a few places before I could find any bread."

No one is peering into the usually decorated windows of Bloomingdales on the Upper East Side of Manhattan, which have been boarded up.

Evacuations began Friday in New York City with the sick and the elderly.

Around 7,000 patients in hospitals and nursing homes have been moved to higher ground. NYU Langone Medical Center and the Veterans Affairs Hospital in Manhattan, two campuses of Staten Island University Hospital, and Coney Island Hospital have evacuated patients.

With a storm surge expected to reach above five feet, Battery Park in southern Manhattan could be underwater.

"New Yorkers like to think we are tough. We are smart enough to know we don't mess with Mother Nature," Gov. Andrew Cuomo said, urging residents in evacuation zones to leave their homes.

Evacuation compliance in public housing buildings is varied, at 80 percent in some buildings and 50 percent in others, according to ABC station WABC-TV in New York. City officials said there were 1,400 people in city shelters and there were still more than 30,000 available cots.

The rest of the city may not have to evacuate, but residents will be virtually stranded. At noon today, all subways, buses and trains around New York City -- the world's largest transit system -- shut down.

People who approached the subways were greeted with bright pink tape over the turnstiles and entrances. Some of the last trains were jammed as the city prepared to lock down. The subways won't run again until Monday at the earliest, city officials said.

The city's 200 subway trains, which are usually stored in outdoor yards, will be stored underground in tunnels across the city. The New York City subway system has 13 under-river tunnels, which might be flooded due to the storm surge.

Only 700 water pumps keep the tunnels dry, pumping 13 million gallons of water out of the subway on a daily basis. But the pumps may not be able to handle the amount of water that could flood the tunnels during the storm, according to the hydraulics team head of New York City's Metropolitan Transportation Authority.