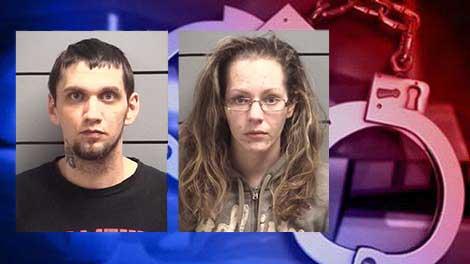 A husband and wife were arrested Sunday morning at a hotel in Plymouth on charges related to the robbery at the Speedway earlier in the morning.

According to the Plymouth Police Department, around 3:45 a.m. Sunday, an employee of the Speedway on N. Michigan Street reported a robbery.

A man took an undisclosed amount of money and cigarettes from the store.

According to police, around 10:30 a.m., Detective Leo Mangus with the Plymouth Police Department saw Curtis Branscom outside his room at the Economy Inn and recognized him from the video from the Speedway store.

Curtis was attempting to shave his beard when police arrested him.

Police said some of the cash was recovered, but most of it had been used to purchase heroin right after the robbery.

Curtis Branscom, 27, and his wife Bethany, 24, were arrested on tentative charges of robbery , conspiracy to commit robbery, theft, possession of a hypodermic syringe and possession of a legend drug.