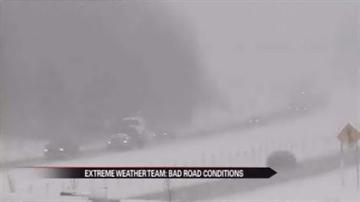 COLOMA, Mich. -- The snow and cold temperatures are a dangerous combination on I-94 in Cass and Berrien counties. The usual salt mixture isn’t effective in temperatures below 20 degrees – and the wind keeps blowing the snow back onto the roads. Traffic is moving slowly and is at a standstill in some locations.

"Slick, icy, can't change lanes, there' no braking, cars are crazy,” said Tim Hardoin, who has been a truck driver for ten years.

"It's terrible. It's terrible. People sliding round, driving too fast,” said Don Jackson, who has been a truck driver for four years.

It's a rough day to be a truck driver in Michigan.

"The roads have been pretty bad until I got on the bypass. And then the bypass and coming on 94 is just terrible,” said Jackson.

Jackson and Hardoin have been driving these roads for years and they're used to driving in bad weather.

"Yeah every other year in Michigan. This is normal,” said Hardoin.

Today, it's not just the elements that are making travel treacherous.

"Trucks are going about my speed or slower. All the cars are passing us. The four wheelers and people who don’t' know how to drive in this. It’s dangerous,” said Hardoin.

Daring drivers are cruising along the interstate at speeds that make even the most experienced truckers nervous.

"If it gets too bad, I shut it down. I'm taking a break now to let the cars get off the road,” said Hardoin.

Truck drivers say drivers need to slow down and pass with care. They need more room to stop so they’re asking drivers to give them a bit more space when passing.