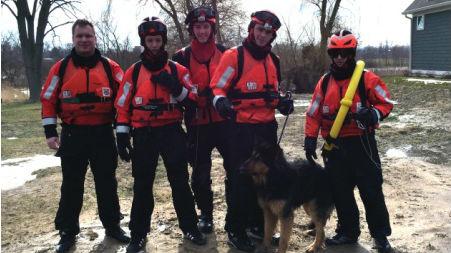 An ice rescue crew rescued a dog from the ice in the Paw Paw River in Benton Harbor Saturday.

The dog was seen walking along the river by itself and no one else was around at that time.

The Coast Guard Station in St. Joseph, Michigan responded just after 11:00 a.m. Saturday morning when the watchstander overheard a scanner report about a German Shepherd stranded on ice.

The dog was on the ice approximately 8 feet from shore.

Initially, the Berrien County Sheriff's Department was responding when Station St. Joseph's ice rescue team was redirected from their training to the scene of the stranded dog.

When the crew arrived on scene, other agencies were there but did not have the right equipment to carry out the rescue.

With the assistance of an animal control officer, who provided food, the crew was able to comfort the dog, place a leash on it, and safely escort him off the river ice.

"Despite only training to rescue humans, many of the same techniques and precautions are applicable to animals and are performed to save them if safe to do so; this was proven today," said Petty Officer 2nd Class Joseph Butler, one of the rescuers at Station St. Joseph.

The dog is currently being checked by animal control for a microchip in an attempt to find an owner.

The Coast Guard says if something like this were to occur, call the local authorities and do not attempt to rescue the dog. Bystanders are most helpful by keeping their eyes on the animal that is in immediate danger.