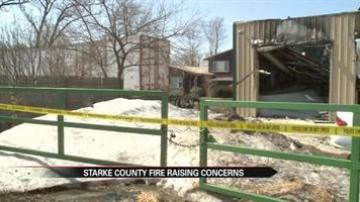 KNOX, Ind. -- Firefighters spent four hours putting out a fire at the Starke County Recycling Company. Fire officials are waiting for the owner's permission to get on the property to investigate.

In September of 2012, IDEM issued a notice to the owner of the property, James Campbell, about an inspection on May 21, 2012.

They asked the owner to clean up hazardous solid waste on their property.

“We found there was solid waste, automotive fluids, oil, trash and waste tires on the side, they were laying there in a manner that creates a hazard to human health and the environment," said Dan Goldblatt of IDEM.

IDEM says Starke Recycling has been making payments on their fines and they have made progress in the mandated clean up.

But February 19, the Office of Land Quality issued Campbell another letter, notifying him of a 30-day deadline to hand over documentation of their clean-up procedures.

IDEM could not answer why the recycling company was being notified once again or if Campbell had responded to the inquiry.

“We don’t know at this point. We have inspectors on the site right now, trying to determine what exactly was going on with the facility before the fire as far as their compliance with IDEM regulations," said Goldblatt.

IDEM says there were no potential threats to the environment because of the fire.