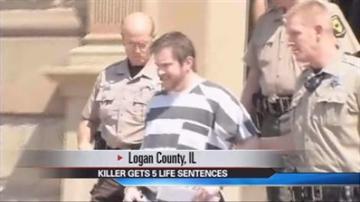 LOGAN COUNTY, Ill. — A convicted killer in Illinois was sentenced to five lifetimes behind bars. Christopher Harris was convicted of killing five members of a family in 2009.

The only surviving member from that attack was three years old at the time.

After sentencing Harris to life, the judge said he could appeal within 30 days.

"He can appeal all he wants. It doesn't matter. I'll go to every single appeal that he has in Springfield," said the sister of a victim, Terri Miller-Reagan. "I'm not worried about it, but to continue to deny is a serious cop out."

The judge gave Harris one life sentence for each of the people he killed, plus 80 years for the attempted first degree murder of the 3-year-old.