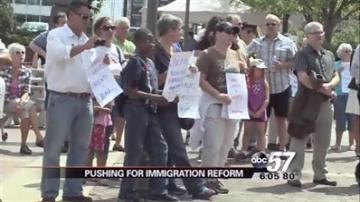 SOUTH BEND, Ind. -- People gathered Friday in downtown South Bend to show there is community support for comprehensive immigration reform and for the process going on in Congress right now.

The Senate passed its version of the law in June and supporters hope the House of Representatives will take it up and move on as well.

One of the speakers said passing a bill will not only be beneficial to Michiana, but to the whole country.

"Passing comprehensive immigration reform will ultimately be good for the country, it's going to be good for the community and for Michiana, but more than anything else - I think it brings us back to being the country we all want to be," said Allert Brown-Gort of the Kellogg Institute at the University of Notre Dame.

Since the Senate passed the bill to the House in June, the process has slowed down dramatically.

Allert said he believes it's because there's a misunderstanding about what the law is trying to do.