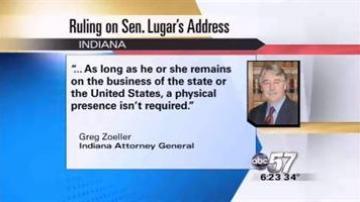 INDIANA -- This home is listed on Lugar’s Indiana driver's license.

The problem is that he sold the home 34 years ago!

But on Thursday, Greg Zoeller upheld that residency, based on Indiana law.

He gave this statement to ABC 57 News:

"If a person has established residency for voting purposes in Indiana, that residence remains the congressperson's residence. As long as he or she remains on the business of the state or the United States, a continual physical presence is not required."

Lugar is seeking his seventh term in the U.S. Senate.

He faces Mourdock in the May Primary.