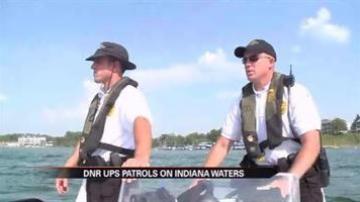 For the last sixteen years, Chris Horan has been taking in the sights and sounds of Lake Wawasee.

"All the boating and swimming activities. It's really nice and clean. I think it's safe for the kids. The fireworks are phenomenal," Horan said.

He spends a lot of his time out on the lake, but lately, he's had to take more precaution while doing it.

"They've kind of nit-picked a little bit and are going after some minor stuff it seems like," Horan said.

Horan was recently given a warning by conservation officers from the DNR for going too fast near the shoreline; and while it may seem like a minor violation, officers say they're just doing their job.

"This is part of our job, and I think boaters would hope and expect us to help keep the waterways safe," Officer Jerry Hoerde said.

Officer Hoerde said they're mainly looking for boats where operators appear to be under the influence. Alcohol is allowed out on the lake, but just like on land, driving intoxicated is strictly prohibited.

"It's not our intention to upset anyone, but with that being said, the only way to keep the waterways safe is to focus on impaired and intoxicated boat operators," Hoerde said.

He's not seeing any more violations this summer than in previous years, but still thinks the department made the right move by stepping up enforcement. And that's O.K. with boaters like Horan as long as the stops are warranted.

"I'm actually glad they're doing it, as long as it's legitimate pullovers, and not just doing it to get revenue or something like that. I'm alright with it," Horan said.