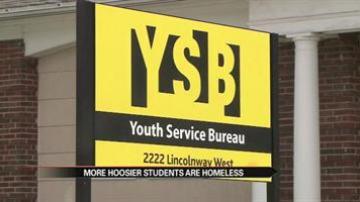 The Indiana Department of Education says a record number of students in the state are homeless.

It's something Strycker sees every day.

She leads the only outreach program specifically targeted towards youth in the area.

The next closest one is 70 miles away.

"It's one of those issues - along with poverty and community violence that we really do need to address in a collaborative fashion," said Strycker.

Strycker and other street outreach counselors are facing an uphill battle.

They're able to help some homeless youth, but don't have the resources necessary to help everyone.

In the last five years, the number of homeless students in Elkhart County has tripled.

That figure is mirrored in La Porte County where 231 kids attended school without having a place to call home.

"Often times, the services available in the county for homeless adults are very inappropriate for an 18-year-old," said Strycker.

In St. Joseph County, the numbers have stayed steady, around 150 each year.

The definition for who qualifies as being homeless is murky, meaning the real number is likely much higher.

"The data is skewed and it's only limited to students in school," said Strycker.

Strycker says her organization estimates there are around 1,000 homeless youth in St. Joseph County every year.

That's why they're encouraging people to educate themselves and help reverse the trend.

"We all have a stake in making sure that our kids are safe, off the street, not victims," said Strycker.

In the US it is estimated one in every 45 children are homeless.