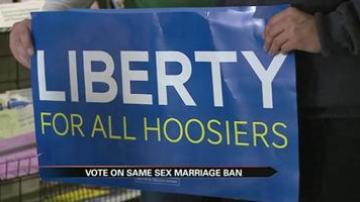 INDIANAPOLIS -- After hours of testimony, Indiana legislators did not vote on the proposed amendment to the Indiana constitution that would ban gay marriage. The vote was postponed.

The brief amendment carries a lot of weight. It could change people's lives forever.

"Family, freedom, and love do not belong on a ballot you know? A function of a constitution is to protect our rights and not deny them," said Benjamin Ford, Freedom Indiana Volunteer.

But some are pushing to change the language in the constitution.

"When things like this come up I go, 'Boy. Why would I want to stay in a state that not only says we don't recognize you but we want to amend our constitution to the point that no one even in the future could ever recognize you?'" said Barrett.

Barrett and his husband got married in New York, but in Indiana, that means nothing.

If this amendment passes, they might not ever have the same rights as a man and a woman who are married:

For many, the issue is much deeper than just being recognized as legally married.

"It would permanently take away our right to share health insurance benefits as well as the ability to visit each other in the hospital," said Ford.

If the proposed amendment makes it through the legislative process, it will go to voters on the ballot.