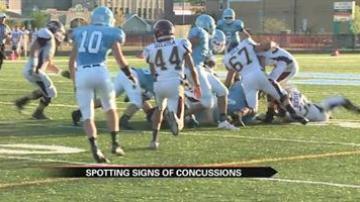 SOUTH BEND, Ind.  --The state of Indiana might be the first to mandate high school and youth football coaches to get education in concussion awareness and prevention.

Whitacre has been dealing with the issue of concussion safety at South Bend's middle and high schools for years.

“We take it very seriously, and we will continue to do so," says Whitacre. "I think the potential law is good, but we will see if it has much effect on us, we are doing pretty much what I have heard about of it already.”

The bill would require football coaches at the high school and youth level to have training every two years to help them recognize when their athletes have head injuries.

South Bend schools have already put a lot of these measures into place.

And the Saint Joseph High School head football coach has already seen a lot of steps taken to further reduce the number of concussions.

“I think it is just a matter of time before we see the results of those things and the changes that have been made," says Ben Downey.  "I feel better about where football is going and I think parents can feel a little more comfortable than they did in the past.”

At the Sports Medicine Institute in South Bend, Doctor Linda Mansfield saw more than a hundred concussions across all sports last year.

“Football is a starting point, because that is where we see most of the concussions but I think as things evolve and we see how the program works I think it should be expanded to other sports," says Mansfield.

There could be a final vote on the measure within the next couple of days.  If it is approved, the new training will become mandatory on July 1, 2014.