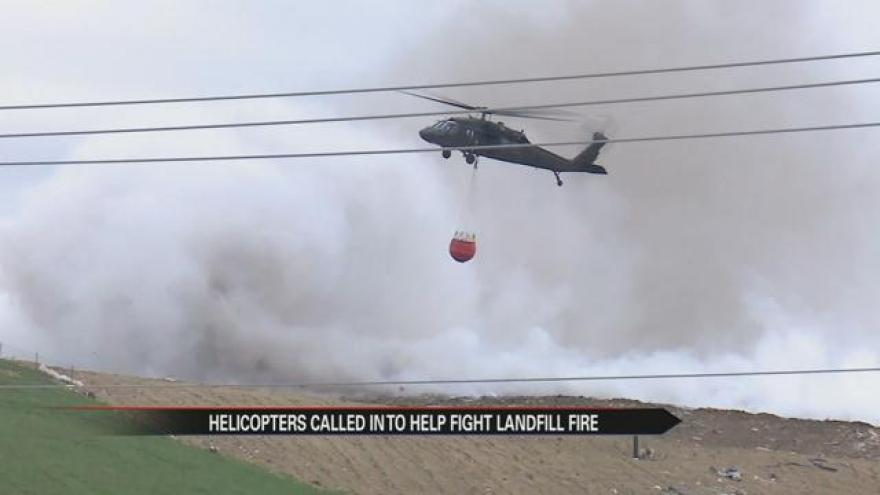 It's a fire that keeps on burning.  More than 40 hours since it started, the Earth Movers Landfill fire in Elkhart County, continues to smoke.

Two Indiana National Guard black hawk helicopters were enlisted to help firefighters extinguish the fire.  The helicopters had buckets attached to them, to help drop water directly on the source.

The fire continues to ravage the landfill, with a paint-thinner and chemical smell strangling the area. It's all the more reason officials are anxious to put it out.

"The fire not being on the surface, or being in the ground itself, is a whole different tactic. It's a challenge," says Rick Rochford, the Fire Chief of Concord Township Fire Department.

Hour after hour, day into night, firefighters from across the area having been working to put out the fire that just won't stop.

"It's our hope, that with the smoke you see coming from the hill right now, will be greatly reduced, and we can say it's successful and move forward," he adds.

They realized more outside resources were needed, and two Indiana National Guard black hawks were seen gathering water from ponds from both the Earth Movers Landfill property, and Elkhart County Solid Waste.

The objective was to get the water as deep into the ground as possible.

"Getting into those hot spotted areas for the deep seated fires that may be burning, and putting a lot of attention into those areas," explains Chief Rochford.

Officials still don't know what caused the fire, and likely won't know until it is put out.

With the wind blowing smoke and embers everywhere, it could take some time.

"The hardest part is the wind," says Chief Rochford. "I will tell you that right now. I firmly believe if we did not have the wind yesterday, we would have had pretty much a successful operation."

An operation that is putting firefighters at risk.

With the chemicals, gas, and smoke in the air, officials are not taking any chances.

"Upon completion of the assignment, they are returning back to staging, where they are rehabbed, monitored, going for food, and further upkeep that is necessary," says Chief Rochford.  "We are moving them quite frequently so they are getting their rest."

There have been no injuries reported.

But there is hope. Hope that with the black hawks, firefighters, and a combined team effort, they will finally smoke out the fire.

"We may be going on into tomorrow. It all depends on the activities taking place today, with the applications of air assistance," adds Chief Rochford. "Our hope is that it's going to be the resolution."