Indiana residents join online petitions to secede from the union 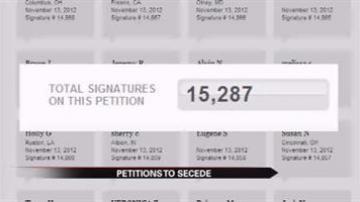 SOUTH BEND, Ind. -- People in more than 30 states, including Indiana and Michigan, have started petitions to secede.

They all want the same thing, to become independent of the United States. It is in response to  President Barack Obama's re-election.

These "do-it-yourself" petitions were started by voters unhappy with the election results. Ironically, these petitions were made available by the White House on its own website.

In order to get a formal response from the Obama administration, petitions have to have at least 25,000 signatures.

In less than three days, Indiana already has over 15,000. It is a bold reaction to the re-election of President Obama, but is it something to really take seriously or be concerned about?

Elizabeth Bennion, an associate professor of political science at IUSB, said no.

"Some of this discussion is overblown. This idea that the states can get enough signatures on a petition and that will mean there will be a decision on whether they will secede from the union is not in fact true," said Bennion Tuesday.

Indiana needs 25,000 signatures to get a formal response from the White House, but that is still only a fraction of the roughly six million people living throughout the state.

"We don't see governors lining up behind these petitions. What we see is dissatisfied voters, which we expect to have after ever presidential election, who are venting some of their frustration and concern."

We got over 60 responses. There are comments like this one from Shawn Bennett," The majority spoke at the ballot box, deal with it."

"The lovely thing about America means you have freedom of speech. With that I say, emphatically, oh hell no! I am not willing to give up this country. Small minded people cannot figure out how to work together. Lets motivate change. The kind of change that involves negotiations of progress," wrote Holly Kingman.

Still, there are others who simply said absolutely, they would sign the petition.

"This is not unusual. We have had many people express a desire to secede from the union," said Bennion.

Can it actually be done, though? It is a question scholars, like Bennion, still go back and forth on.

"There is a big constitutional debate about whether or not it is even possible and constitutional for a state to secede from the union," said Bennion.

Bennion said these petitions point to the large issue - how "we the people" can continue to strengthen the union despite the growing challenge to adapt to an ever-changing America.