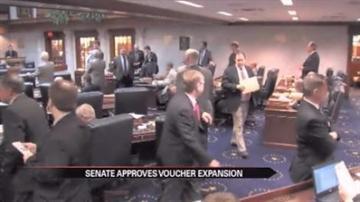 INDIANAPOLIS -- The Indiana Senate voted to expand the school voucher program that would allow siblings of students already getting vouchers to qualify.

It would also raise the value of each voucher by $200 and eliminate the one year waiting period for students who attend "failing" schools.

One lawmaker says it is not a good idea.

Other local lawmaker made a passionate plea on the senate floor.

"Let's move it beyond the money," said Middlebury Senator Carlin Yoder. "What's best for the kids?  Is it best for kids to sit in a failing school, year after year after year, because their parents can't afford the tuition of a private school, where they'll get the education that will actually move them forward?"

The proposal now heads to a Senate and House committee.