Indiana toll road is clean and clear and under control 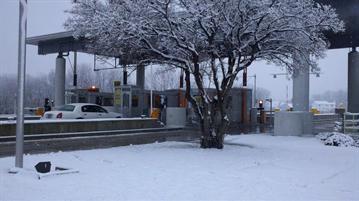 MISHAWAKA, Ind.-- As most of Michiana returned to work following the holiday, so did road maintenane crews.

The second snow storm of the year hit just at the height of rush hour causing problems throughout the area. But, for commuters on the toll road, the ride was smooth sailing.

"Toll road is perfectly fine! We had no problems on the toll road," said Juliana Tchoukaleff as she was exiting the toll road.

"Not too bad! they were very smooth, very dry. Well, not dry, but plowed and salted. So not a bad drive," added Tiffany Longacre, another driver exiting the toll road.

"We had full crews on at midnight because it was predicted to start a little bit earlier," said Pat Condon, Maintenance Manager for the ITR Concession Company. "We actually had trucks out on the roads waiting for the storm to start."

Crews coated the roads in a beet juice and magnesium chloride mixture to head-off the possibility of freezing.

"Then the plows hit the road for the rest of the morning and it was straight salt from there," said Condon.

For the rest of the day, the biggest problems for Condon were drivers and slush.

"Slush is worse than water when it comes to hydroplaning your car," said Condon.

And drivers need to slow down.

"People seem to think that because the big sign says 70 miles per hour, they can drive 70 miles per hour. But the truth is, we can't drive the cars for them. They need to slow down," said Condon.