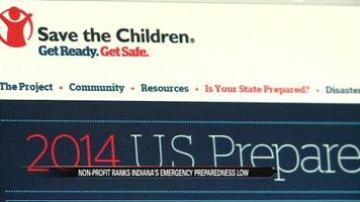 Eric did this EARLY this morning so it probably wasn't on the home page anymore. But it's already on the site :)

According to a national children’s charity, Indiana is unprepared for natural disasters.

According to the report from Save the Children, Indiana, along with 20 other states, would be unprepared if a disaster were to happen.

Policy Directory of Save the Children Richard Bland says child care centers are not even required to create disaster plans.

"It's those childcare providers that have the least resources that are just scraping by that will do the least required by law. You can't just rely on providers or schools to do what they think is right."

Only two states in the nation have not met any of the standards, and one of them is Michigan with no regulations set, leaving quite a bit of room for growth and improvements.
Share this article: