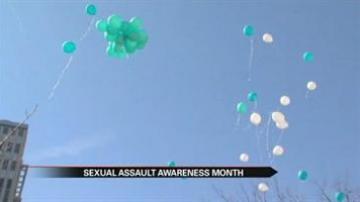 INDIANAPOLIS -- Dozens of blue and white balloons were released in Indianapolis Tuesday as a sign of hope for victims of sexual violence and sexual assault.

April is sexual assault awareness month and Tuesday a group of survivors and supporters shared their stories on the State House in Indiana.

Indiana comes in second for the number of rapes reported among high school girls.

"The law, it just doesn't support us as people who could be and have been victims of sexual assault and rape. It needs to change. And Indiana in comparison to all of the other states in the US, we're way behind," said sexual assault victim Jenny Wendt.

Survivors say lawmakers can also stand beside them changing the laws to make it easier to prosecute the people responsible for rape, incest, and sexual assault.