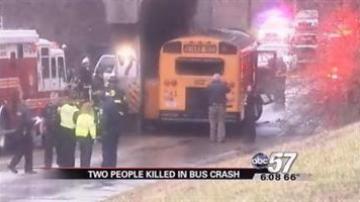 The bus was only a few miles from the Lighthouse Community Charter School when it crashed into a bridge.

The bus driver and a young girl were killed.

Police said that 10 other students were injured -- two critically!

Fifty students between the ages of 5 and 16 were on the bus at the time.

"Very upsetting.  I've got kids the same age.  You can just imagine what these families are going through right now.  It's just a tragedy," said Kevin Mays, who works near the crash scene.

Right now, police do not know what caused the crash,

The road is known to flood, and it did rain overnight, but witnesses did say the road was clear on Monday morning.