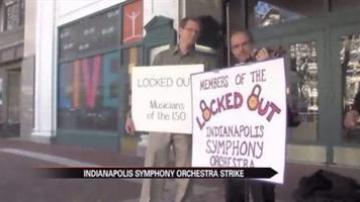 INDIANAPOLIS, Ind. -- The Indianapolis Symphony Orchestra has gone on strike.

The musicians are fighting over a 41% pay cut, a reduction of shows and loss of health benefits.

"This is part of what makes the city great, and everybody knows that," said violinist Louise Alexander. "Even if you don't come to the orchestra, you know that we have a full-time orchestra.  You know that we're up there in the ranks.  We want to have a great city."

Talks with the the musician's union stalled last week. Then the orchestra was later locked out of its rehearsal space.

This afternoon, some musicians played music outside at monument circle while others protested.

So far performances for the next two weeks have been canceled.