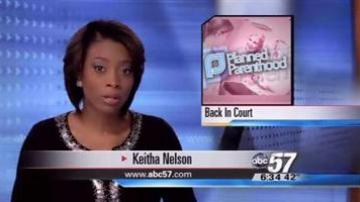 The state wants the court to lift a judge's order blocking the enactment of a state law that cuts funding.Thursday both sides laid out their case to a judge and the media.

Planned Parenthood has 28 clinics in Indiana, four of them perform abortions. After the law was in effect for about 40 days, Planned Parenthood had to briefly shut its doors. About 9,300 Medicaid clients who use the clinic were left without service.