INDOT has plans to improve safety at CR29 and US6 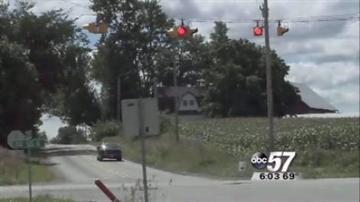 ELKHART COUNTY, Ind. -- There have been so many deadly crashes at an Elkhart County intersection INDOT is stepping in to try and prevent more. The state is considering building a bridge to take CR29 traffic over US6.

The speed limit at the intersection of CR29 and US6 is 45 miles per hour.

But watching traffic with resident Jim Fackler, it was clear cars were going faster than the posted speed limit.

"It has had a history of serious accidents including several fatalities," said Mary Foster of INDOT.

Speed isn't the only factor in the frequent car crashes.

"People just don't stop down there and pay attention. It's kind of a bad way coming up because you come up at an angle," said Fackler.

After reviewing their annual five percent report, INDOT came up with a plan.

"INDOT's Office of Traffic Safety has identified this intersection on the INDOT five percent report which is areas with higher than average crash rates," said Foster.

INDOT wants to build a bridge on County Road 29 that would take it over US 6.

INDOT says the project would cost about $3 million.

There will be a public hearing to talk about the proposal Wednesday, August 28th at the Wawasee High School at 6 p.m.