INDOT powers up with propane 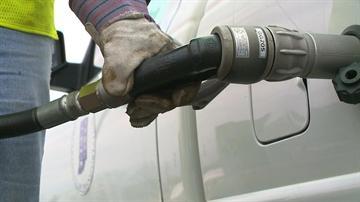 La Porte, Ind. – The Indiana Department of Transportation is using an alternative fuel to take the punch out of rising gas prices. It’s converting some of its fleet to propane and cutting its gas budget by millions.

The majority of trucks changed over to propane are pickup trucks. The LaPorte District does have one dump truck running on the alternative fuel.
“They’re used for sending surveyors out, or sending road workers to a job site or even road kill crews. Really, whoever it is, those are the trucks that get a lot of use,” said Deitchley.
INDOT started converting trucks last year and now 133 vehicles of the more than 600 LaPorte Fleet are powered by propane.
An Indiana company changes the trucks from gas guzzlers to propane takers.  The starting cost for making the change is about 5 thousand dollars and could go up to 7 thousand dollars.
Deitchley said INDOT gets some grant money for the natural gas. “We pay anywhere from a $1.00 to $1.20 a gallon of propane compared to the current gas prices which continue to go up,” said Deitchley.
Not only is propane giving them a cost savings on fuel, but Deitchley said there are also safety benefits.
“Propane is ultimately safer because the temperature to ignite is a lot higher than gasoline and it vaporizes really quickly if there was a spill, so in terms of a hazmat situation,” said Deitchley.
He said the fuel also burns cleaner, so it also takes a chuck out of maintenance costs.
INDOT had to install fueling stations across the state to support the use of propane.
There are 115 fueling stations in Indiana and 19 in the LaPorte District.
INDOT said the hope is to keep converting more trucks as a cost saving measure, and to even switch some larger trucks to propane.
The INDOT LaPorte District covers 13 counties across Northern Indiana.
Share this article: