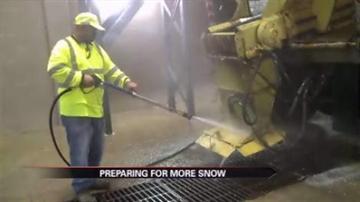 Even though it is warm and rainy outside, the Indiana Department of Transportation is preparing for the next big snow even by making its own brine recipe.

It’s one of two new salt dome facilities in northern Indiana. It’s only about a year old.

Crews use recycled water from washing the plow trucks after a long run of plowing and mix it with more salt.

That makes the brine which they use to treat the roads.

INDOT has been using brine for nearly 10 years.

But newer facilities like this one streamline the process.

"The water goes down into a drain and the drain shifts over onto where we make that brine because its salty water ultimately and we use that as recycled brine,” said Matt Deitchey, INDOT LaPorte District Spokesman.

The brine mixture only costs about 8-cents a gallon. Other chemicals can cost anywhere from $1 to $1.15 a gallon.