INDOT works to improve safety on the roads 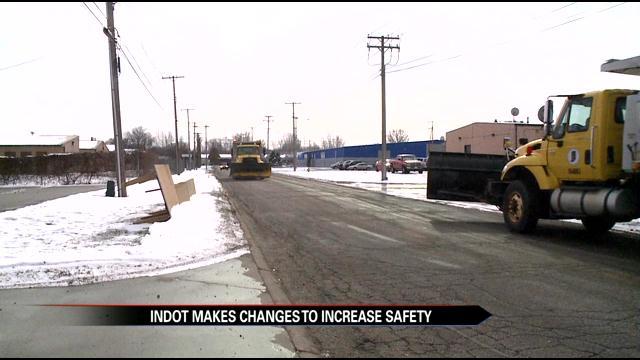 The Indiana Department of Transportation is working to improve safety on roads across the state.

They are adding plow trucks and realigning routes.

For the first time ever they will also begin using eight new trucks called tow plows.

“It's been pretty okay for right now. As long as they keep up with the roadwork and have plenty of workers out this year we should be okay,” said driver Melissa Dematteo.

Dozens of plow and salt trucks hit the streets of Michiana Monday, clearing snow and treating roads as usual.

But this year, INDOT is hoping to become even more effective, working hard to keep roads safe.

“It's certainly coming sooner than we're accustomed to seeing. But we spent the warmer months preparing for this. By training our drivers, by hiring part time and seasonal drivers, and stocking up on salt. We already have most of what we'll need for a typical winter,” said INDOT Spokesperson Will Wingfield.

The department is adding drivers to existing routes and realigning routes to increase response times.

Previously, plow trucks serving roads such as State Road 23, traveled to Plymouth to refill on salt.

This year those trucks will be based in Mishawaka, a few miles away from routes.

Drivers said it is a smart change because every minute counts in severe weather situations.

“I think its pretty important especially with the concrete roads we have on Capital Avenue and everything. As long as they keep that pretty salted and pretty cleaned up we shouldn't have problems with salt and everything else,” said Dematteo.

It could even help maintain roads as early as Monday night, with more heavy snow headed this way.

“Drivers have been notified. They're ready for this lake effect snow that is in the forecast. If it plays out where there is heavy snow in the northern parts of Laporte, St. Joseph, and Elkhart County, then we have the ability to shift resources from the north to that particular area,” Wingfield said.

Another change is the addition of eight trucks, called tow plows, operating in rural parts of the state.

“One driver is able to plow with a typical truck but also tow a trailer that has another plow with its own materials spreader. We're able to effectively plow and treat two lanes at once in some of these rural areas,” Wingfield explained.
Share this article: