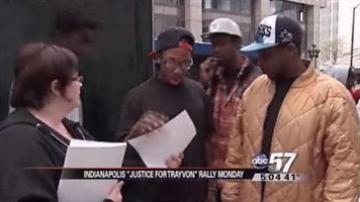 An Avon mom is organizing a march Monday to show solidarity against the shooting. The march will begin at Crispus Attucks High School in Indianapolis and will move through several downtown streets, including Meridian.

Martin was shot and killed by neighborhood watch captain, George Zimmerman. While some believe it was racially motivated the man with the gun said it was self defense.

The mother organizing the demonstration said it's about raising awareness.

"This is a nationwide problem. Our black males are profiled everywhere and it happens every day," said Emily Caldwell. "We're asking people get involved in their community and step up and take action and speak out. We want to show every voice does count."

More than 800 people are expected to attend Monday night’s march.

In South Bend Thursday night a march for Trayvon Martin is set for 5:30. It will start at the Civil Rights Heritage Center and end at the Martin Luther King Center.