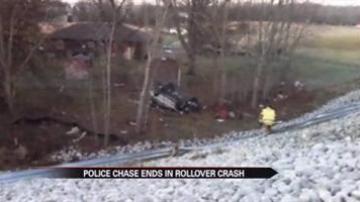 Police say they took a car, led them on a high speed chase, and then crashed on a busy highway.

The shocking part is the driver was only 13 years old.

The chase started early Monday morning when Columbus Police tried to pull the teens over for driving crazy on I-65.

A short time later they rolled their car down an embankment.

Police say the teens are runaways from Indy.