Indy vice principal accused of having affair with 16-year-old 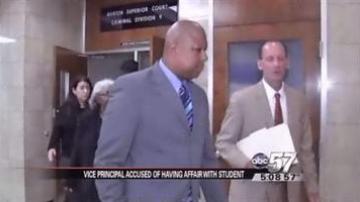 INDIANAPOLIS, Ind. -- An Indy vice principal is headed to trial.

He's accused of having an affair with a 16-year-old student. Prosecutors say it all happened in his school office.

According to an affidavit, the girl told police that she and the 41-year-old had sex five times this year between March 24 and April 9.

The prosecution said these types of crimes are happening far too often,

"It happems whether it is on school grounds, or a field trip, or a time when a teacher or coach takes a student somewhere for purposes of an athletic competition,"  said Deputy Prosecutor Kristina Koroboy. "I wish I could say it is uncommon, but the reality is it simply isn't."

The vice principal has since been placed on home detention and GPS monitoring while he awaits trial.

He's been suspended with pay pending the outcome of the investigation.