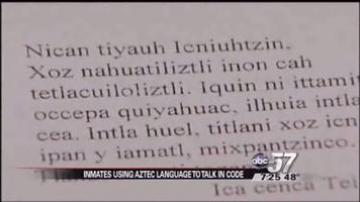 The prisoners are using the Aztec language to communicate with each other.

Prison officers spotted a letter and it sparked an investigation.

Thirty inmates are now being investigated for trying to start a new gang inside the prison.

Santa Fe Prison officials said that the imates will often learn the language before they get to prison and then teach it to other imates.