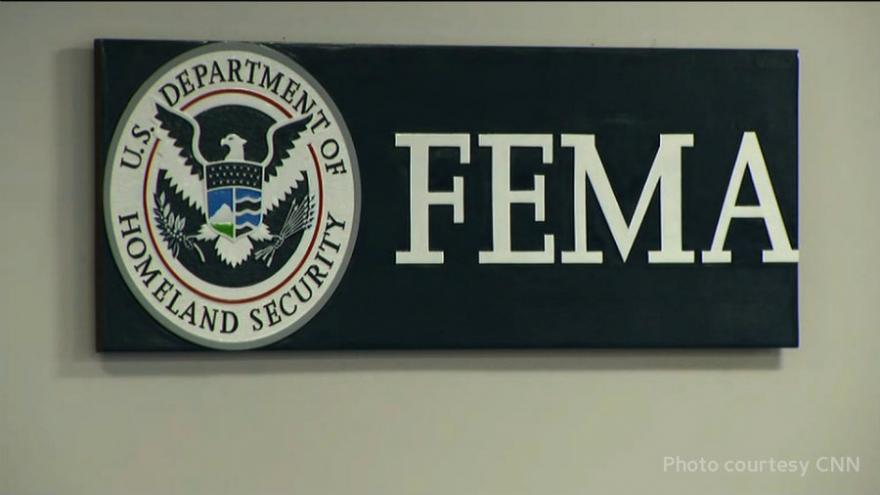 (CNN) -- A Coast Guard officer approached a woman whose red vest read "Good Samaritans." People have been calling our base in Puerto Rico asking how to help with the hurricane recovery, he said. What should we tell them? She promised to get him a phone number for local recovery workers.

Conversations like that -- between multiple federal agencies, nonprofit groups, and officials in touch with first responders -- are happening around the clock inside FEMA's National Response Coordination Center. When disaster strikes, this D.C. command center is staffed with more than 200 workers from across government who specialize in 15 emergency support functions, which are key concerns that must be addressed in the aftermath of a disaster, like transportation, logistics, search and rescue, and public health.

It didn't look like a weekend in FEMA's NRCC. The room was fully staffed with employees who will work 12 hour shifts for seven days straight before getting seven days off. FEMA leadership described it as a "historic time" because never before had this central command worked two massive back to back storms at the same time like Harvey and Irma, with Hurricane Jose also brewing. CNN made a rare visit to the center, which is usually closed to the public.

The NRCC is a large room with computers, phones and screens that show weather maps and television news. One screen listed recovery priorities -- such as restoring electricity -- and another showed a map of prepositioned resources.

On a normal day, about five FEMA staffers keep watch at the NRCC. But the back-to-back impacts of Hurricanes Harvey and Irma have the NRCC at Level 1, the highest level of alertness.

FEMA Administrator Brock Long said the federal government's primary role in the response is supporting state governments and coordinating resources that come in from around the country.

"Not only are we moving commodities, but we've moved search and rescue teams, emergency power crews," he told CNN's Rene Marsh. "We're going to have to have a ton of inspectors to come in to back-fill state and locals' ability to make sure how do the roadway systems hold up."

Walk through the command center, and you see desks dotted with snacks -- popcorn, pretzels, candy. Many eyes are fixed on computer screens. The room murmurs with conversations and officials make phone calls and gather for impromptu meetings. Signs above the computer screens and hanging from the ceiling identify who sits where.

At one desk sat an employee of the Interior Department. Nearby is a cluster of officials who keep track of the cost of storm response. Another row of desks was for military officials, who sat tuned to their computer screens in uniform. An employee wearing the logo of the Bureau of Alcohol, Tobacco, Firearms and Explosives walked by. And then a voice on a loudspeaker called for State Department representatives to huddle with emergency response managers in the front of the room.

Shortly after midday, officials gathered in a conference room down the hall for a strategy meeting led by Long, the FEMA administrator. Cameras in the room allowed Long's voice and image to be beamed out on large video screens in the command center where the more than 200 staffers remained in front of their computers. The goal of the meeting was to make sure that the variety of agencies across government responding to the storm were on the same page.

Long said the meeting was one of many he attended during the day, including one with power utilities.

"We could see millions of people without power in Florida for multiple days in some areas, maybe weeks," he told CNN after that meeting. "I think it's very important to set the expectations of citizens."

The experience is intense and immersive for the hundreds of employees who leave their regular offices and gather here when disaster strikes.

One employee said she had lost track of the time but that "it's so busy here the 12 hours just flies by."

"I don't even know what time it is but I know I get off at 8," she said, stopping for a brief restroom break. "When I get home, I'll talk to my husband for 30 minutes, then I'll crash. That's all I can do."

The two shifts working this week, called the Blue Team, will hand off in a few days to the Gold Team. FEMA brought in comfort dogs to make the experience easier.