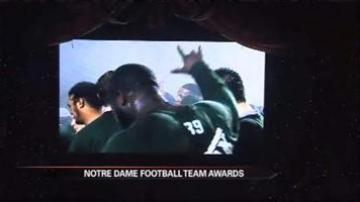 SOUTH BEND, Ind. -- Friday night was a very emotional night for a lot of the Notre Dame football players and their families, especially the seniors.

All together seventeen players were honored.

The Offensive Newcomer of the Year award given to Everett Golson

The Count On Me Award was given to Theo Riddick.

Manti Te'o won the MVP award. He accepted the award from New York via satellite.

"I just wanted to tell you guys that I love you guys so much, I mean, I'm over here in the middle of New York and there's just one place I want to be, with all my brothers."

After the Notre Dame Echoes, we caught up with Everett Golson who spoke about his success this year.

"I think with me being so young, and you know everything started off moving kind of fast for me so I didn't really have any time to slow down and think about it," said Golson.

And we talked with Louis Nixon III as well about his first Echoe award.

"Nothing gets better than this, your team thinks you're the best line backer of the year for them and I'm happy about it. Now, I want to win some awards outside of the team, maybe be a first team All American," said Nixon.