Inside the Republican National Convention in Cleveland 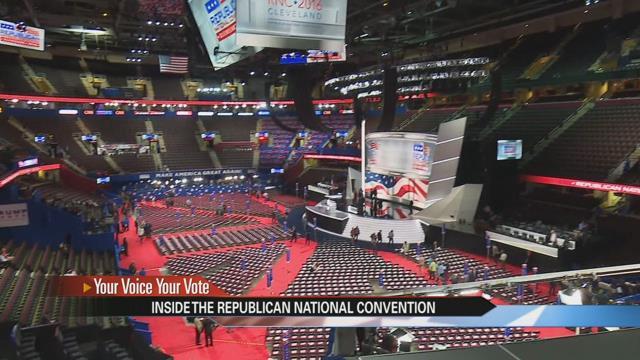 The Republican National Convention kicks off Monday at the Quicken Loans Arena in Cleveland. ABC57 spoke with some of the delegates to see how they feel about the experience.

“I’ve always wanted to be at a convention. I have goose bumps just thinking about it," said Karen Wyld, a delegate from South Carolina.

“It’s as good as everyone said. I’m excited! I’m Facebooking all the time," said Teresa Mattingly, a delegate from Texas.

“The energy is totally contagious," said Kendal Jessup, a delegate from Texas.

For first-time delegates being at the Republican National Convention is exciting.

The Quicken Loans Arena looks like anything but the home of Cavaliers.

Convention organizers say they are expecting massive crowds and a lot of media.

“We are anticipating that 50,000 people will be coming to Cleveland for the convention. We’re expecting 15,000 members of the media to be here, which makes us the largest media event in the world, second only to the Olympic Games in Rio," said Alee Lockman/RNC Regional Media Director.

The RNC had just four weeks to convert Cleveland’s arena for the convention.

“We replaced every inch of branding in this arena, which obviously takes a lot of time," said Lockman.

As the convention kicks off, what does Lockman suggest?

“My personal advice for everyone is to definitely be here on Thursday night when the balloons drop; it’s an experience like nothing else," said Lockman.